How to Fix: Internet Explorer has stopped working

Removing old Antivirus that cause slowness and instability

Things have been moving right along at Tidbits for Techs, quite literally! Toward the end of February, we got word that a rental home was available. We were living in an apartment that was just too small for our family of four, and the house was big enough and then some. The price was right, and everything fell right into place. We had to pack our home and be moved and out of the apartment inside of FOUR days! We worked tirelessly, but we got it done!

A major consideration for the move was that the broadband speed in the neighborhood of the new house is 1.5mbps DSL. No cable, FIOS or other technology. Just DSL with 2003 speeds. We decided that it would be enough for our needs (including my full time work-from-home job) and we took the plunge.

I can say that going from 30mbps Cable to 1.5mbps DSL was not easy. We went from high speed to high latency! Comcast’s latency was only 10ms, and now CenturyLink’s DSL is 60-80ms most of the time.

In an earlier post, we were going to capitalize on the high speed cable we had in order to bring a VPS home and run a Minecraft server ourselves with our own extra computer. With the DSL we can’t do that! But, we are still using that computer to run a Minecraft/Bukkit server just for our own use, and we are also using it to optimize our Internet connection. How?

Well for one we’re using the Squid web proxy server. It caches everything that goes through it. It helps when we use the same things. For example, my wife downloaded a PDF file and then sent me the link for it. It took some time for her to download, but because of the proxy server, I downloaded it instantly. Web sites load slightly quicker too and it uses a bit less bandwidth, leave more for other users on the network (sometimes we’re all four on our computers at the same time.)

We’ve also learned to be OK with watching youtube videos in 360p. Anything else just takes too long. Being patient helps, and lowering our expectations has been a huge help. It is NOT high speed broadband like we’re used to- but its enough. 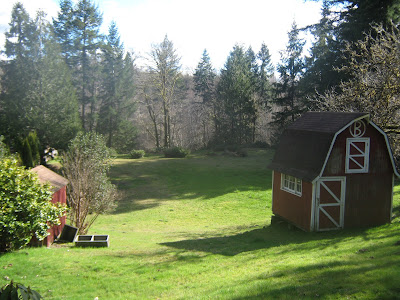 I’ll detail our digital adventures as I refine things and let you all know how its going. And this, to the right, is what we gave up high speed for. An acre of land, a rushing river behind it, peace and quiet and room to breathe. Aaaaahhh…