4 months and 4 days: Back in the saddle

Book Review: “I am AWAKE” by Fisher Samuels 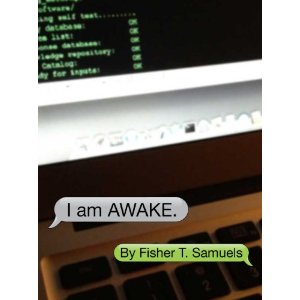 “I am AWAKE” —- “John Watson, PhD student, husband and father to be, struggles to keep his research and career goals on track as he discovers strange anomalies in his artificial intelligence system. As his fledgling expert system grows capable of autonomously navigating, understanding and interacting with the Internet, his dreams begin to unravel when the system becomes targeted by malicious hackers, greedy corporations and someone inside the university. John and his expecting wife Sarah must protect their future as his research professor, Dr. Max Jeffries, threatens to pull the plug on a decade of work when the system begins behaving in ways that John can’t quite fully explain. “

Its fair to say that I am probably right smack in the middle of the target audience of the book “I am AWAKE.” I’m a dyed in the wool geek in his late 30’s, and IT professional since my teens. One thing I’m not though is a programmer. The book spoke about programming very lightly, “coding” as it is called among programmers. But it’s very light on technical details, which I was quite glad for. If I wanted those, I’d be picking up a different kind of book, most likely with a camel or llama on the front. While a bit more technical than your average mystery thriller, the areas it touched on were not overwhelming, and to be blunt if someone didn’t understand them, they would be able to infer their meaning from context. The most important parts of the story were non-technical in nature for the most part. Even contextual idea of the subject would be enough to allow someone to keep going and still enjoy the story. And enjoy the story I did!

John Watson is very likable and easy going. He is also a consummate geek; so much so that I encouraged my wife to read the book because it so well describes what it’s like! I felt an immediate camaraderie with the character, and was able to relate to his emotions and fears easily. The story had some very good twists, turns, and delights. The end came, and I was quite satisfied with how it all turned out. I am very much looking forward to Mr. Samuels’ next book!

Check out this book at Amazon