For a long time, Linux advocates have said that Linux is great for reviving older computers, turning a slow obsolete computer into something worthwhile. Having been a Linux user for over 10 years, I have done this several times myself. Usually though, I have done it simply because I could. Maybe turning an old desktop into an ersatz server, such as the one I use in my home for DNS, Minecraft and more. Especially for older machines, I prefer Debian since it is lightweight and has all the packages I could possibly need.

Recently though, the need came up for a backup computer that I can use for work. My original plan was to get a 14″ or 15″ laptop with 2GB ram and a dual core processor that I could use Windows 7 or even Vista on. Most viable used laptops were in the $150-200 range.

I was discussing this with one of my work mates, and he reminded me of CrunchBang Linux– a lightweight distribution based on Debian. He ran it for some time on an Atom powered netbook with 1GB ram with great success. We talked about it some more and I picked his brain. It’s compatible with the VPN setup my employer uses, and there’s support from the company to get it running if need be. Even better, I could lower my requirements for hardware and thus spend less of my hard earned cash!

Thus began Project 50/50. The goal is to acquire a suitable laptop for $50 or less, and make the necessary upgrades for another $50 or less.

The first thing I had to do was set some basic requirements. After a bit of research, I settled on the following:

Works great as long as you only use some letters.

I started searching on Craigslist. It took a lot of searching to find what I was looking for. The range of available computers was astounding. For $60 I could get a Windows 98 laptop: “Works good as new!” “Perfect for college students”…. right. If that college student were to be graduating in 1999! Other laptops were missing hard drives, had destroyed screens, keyboards that had had the keys eaten off by puppies, the whole nine yards. But one low priced laptop popped up, met my requirements, and was priced right. 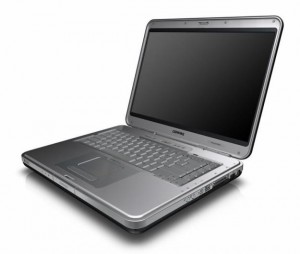 A stock photo of the Compaq Presario v5000.

With shipping, it busted my budget by $5. Given that the same model sells online for more than twice the price, and I’d have had to spend $20 in fuel to go get it, I thought it was a great deal.

Now, there’s one detail that I’ve left out so far, and you might be wondering why I haven’t mentioned the processor. I aim to prove a point with this project, and that’s that I can make this project work with any processor within the range of the other specifications I need. The Celeron 1.46ghz in the laptop will test this out for sure!

I also mentioned “necessary upgrades” that I allotted $50 for. Pretty much any used laptop (especially one a few years old) is going to have a dead battery and I will need a new one. I intend to get a 8800mah battery. They can be had on Amazon for under $40. I also don’t trust the wifi on the laptop to keep a good signal in all situations, so I will spend some money on an external USB wireless adapter with some real horsepower.

For the next installment of Project 50/50, we’re going to examine the goods, make some changes, and get Linux going.  Continue to Project 50/50 Part 2: Examining The Goods