Biting the hand that feeds less and less: Boycotting Slashdot.org for 1 week

In the previous installments of Project 50/50 we selected a laptop, made some changes, installed Linux, and got the battery upgraded. In this round, we’re going to look back at over a month of use and getting intimately familiar with the Compaq Presario v5000, Crunchbang Linux, and the battery.

We also promised to explore a WiFi upgrade. It turned out to be unneeded. The internal WiFi adapter works just fine. I did borrow the Rosewill RNX-N180UBE from my desktop PC to give it a try. Because of the better antenna, it does give a stronger signal. When I travel, I’ll be taking it with me for sure. But for around the house, or where signal is decent, it simply isn’t needed.

The laptop has been in use for almost 2 months during this project and I’ve had a chance to really get to know the computer better. I must admit that my expectations were way off. I was expecting something that would be “good enough” and that would get me by in case my desktop computer could not be used for work (due to a power/internet outage). Instead, I got a computer that has become my go-to computer for just every day browsing, blogging, facebooking, and the like. In fact, the majority of this entire series was written on the laptop!

I was also expecting to hate the touch pad, but its actually quite good. The only thing I really don’t like is the lack of screen real estate. My desktop PC has three screens, and I make good use of them when at work. Crunchbang Linux has the ability to use multiple desktops, but its just not the same as being able to see three screens at once, especially for chats. A Linux compatible USB screen may be in my future for work.

The only real annoyance I’ve had with the laptop is that sometimes the keyboard sticks and I’ll get a couple of dozen of one letter suddenly while typing. It doesn’t happen too much, and if it gets worse I’ll just replace the keyboard.

Hardware wise, the Celeron 1.46 CPU has proved sufficient, although I’ll admit that it doesn’t take much to max it out at 100% usage. That usually induces a slight delay, but it’s manageable. It’s rarely bothersome. RAM usage has been surprising low. Even with a dozen tabs open in Chrome, its usually less than 1GB used and the slowdowns are due more to CPU bottlenecks than anything else. 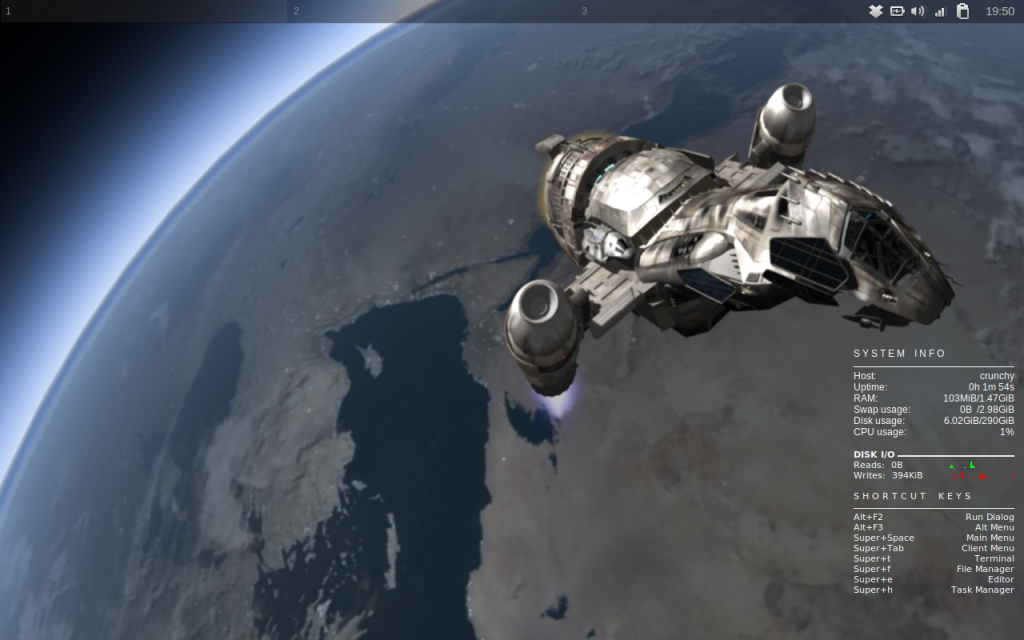 Project 50/50’s desktop with a graphic from deviantart.com as the background.

So, to recap: I spent $55 on the laptop shipped to my home, put in a 320GB SATA hard drive that I already had, and spent $43 shipped for a 8800mah battery that gives me almost 5 hours of battery life. It handles the majority of tasks without any problem, and is comfortable to use. My wife even likes to use the laptop! I am extremely satisfied with the laptop and expect to use it for the foreseeable future.

If you have any comments or questions, feel free to leave a comment below.